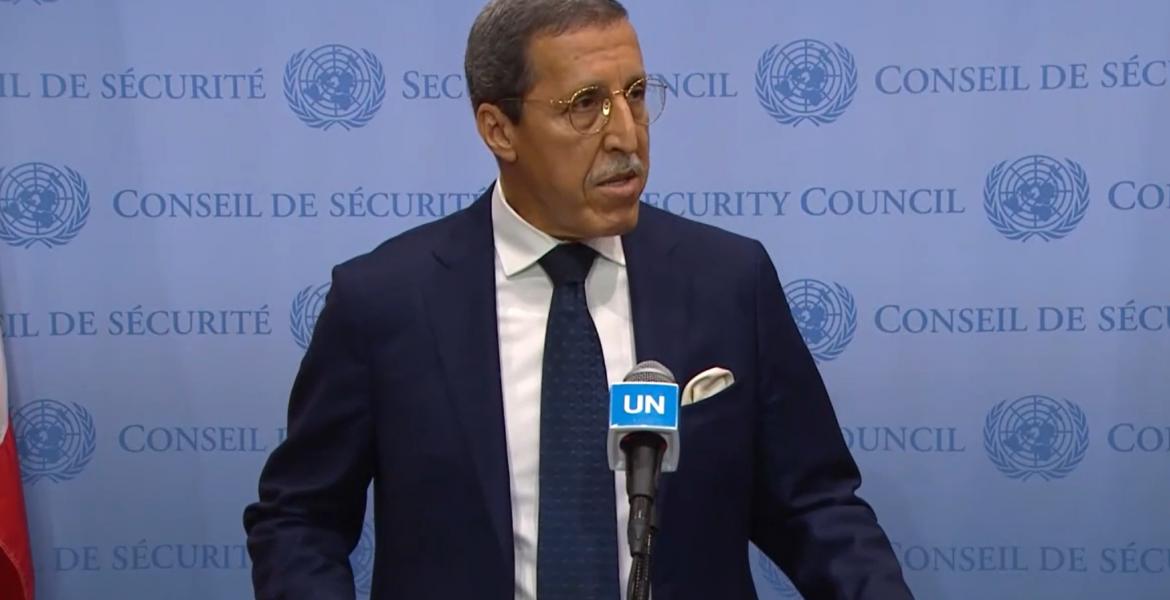 Ambassador Omar Hilale, Permanent Representative of Morocco to the UN, said on Thursday in New York that the new resolution adopted by the Security Council on the Moroccan Sahara enshrines in an "irreversible way" the pre-eminence, credibility and seriousness of the Moroccan autonomy initiative as the only solution to this regional dispute within the framework of the Kingdom's sovereignty and territorial integrity.

The resolution 2654 "irreversibly enshrines, like the Council's resolutions adopted since 2007, the pre-eminence, credibility and seriousness of the Moroccan autonomy initiative as the only solution to this regional dispute within the framework of sovereignty and integrity of the Kingdom," Hilale said at a press conference held following the adoption by the Council of this resolution which extends the mandate of MINURSO until October 31, 2023.

The ambassador noted, in this context, that the Security Council has just reinforced the massive support of the international community for the autonomy initiative, noting that this support is reflected in the expression of "strong, clear and official" support of more than 90 countries to the Moroccan initiative, as well as the opening by 30 other countries of general consulates in the cities of Laayoune and Dakhla, in confirmation of the Moroccanness of the Sahara.

Regarding Algeria, Hilale noted that the Security Council has sealed once again its status as a major stakeholder in the regional dispute over the Moroccan Sahara, by enjoining it to cooperate and engage with the UN Secretary-General in the political process of the round tables in a spirit of compromise, and realism until the completion of this process.

Hilale also said that the new resolution reaffirms the consistent position of the Security Council, and through it the international community that the solution to this regional dispute must be political, realistic, pragmatic, sustainable and based on compromise.

First, the Council asks Algeria as a stakeholder in this conflict to develop and expose its position on the Sahara issue in order to move towards the solution of this dispute, he said, adding that this request is in line with the call of the UN SG to the four parties, including Algeria, in his last report to the Security Council, asking them to show flexibility and realism and refrain from any preconditions to this process.

In the second provision, the ambassador added, the Council calls on the armed separatist group "polisario" to end its obstructions to the freedom of movement of MINURSO in its mission area and to cease its obstructions to the movement of resupply convoys of its observers, Hilale explained, adding that these "irresponsible and condemnable" acts raise the deepest concerns of the members of the Security Council in this regard.

Regarding the third provision, the Council calls on international humanitarian organizations to ensure that the delivery of food assistance to the sequestered populations of the Tindouf camps are carried out in accordance with the good practices of the United Nations, he noted, pointing out that the executive body of the United Nations considered it important to insist on this requirement in order to stop the embezzlement of humanitarian assistance by the armed separatist group and the Algerian Red Crescent.

"This embezzlement has been confirmed in several reports of the Office of the High Commissioner for Refugees, the anti-fraud office of the European Union and many humanitarian NGOs," said the Moroccan diplomat.

Regarding the fourth new provision of resolution 2654, Hilale said that the Council strengthens its request that all efforts be undertaken to proceed with the registration of the populations of the Tindouf camps, considering that this insistent request reflects the exasperation of the Security Council with regard to the refusal of the host country, Algeria, to allow the Office of the High Commissioner for Refugees to proceed with the registration of these populations. "This refusal has lasted for more than a quarter of a century," he said.

The ambassador also noted that the Security Council has commended, in its new resolution, Morocco for its efforts and achievements in the protection and promotion of human rights in its Saharan provinces.