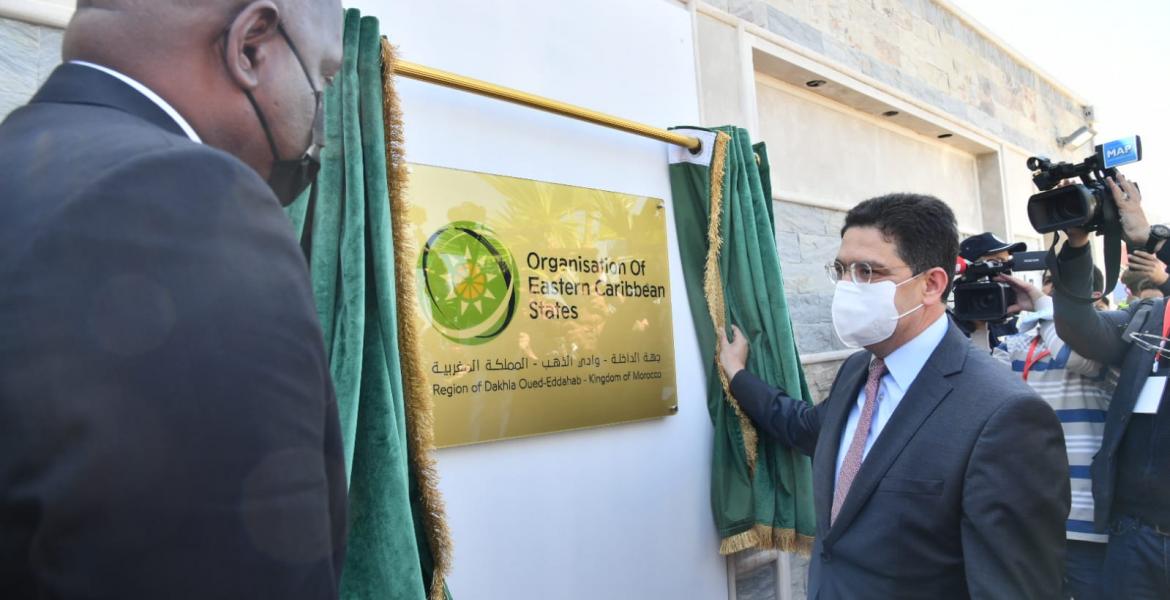 The opening of a consulate representing the six countries of the Organization of Eastern Caribbean States (OECS) in Dakhla confirms the growing support for the Sahara’s Moroccanness, and reflects the strong relations between Morocco and this regional grouping.

The remarks were made at a joint news conference in Dakhla by the Prime Minister of the Commonwealth of Dominica, Roosevelt Skerrit, and Moroccan Foreign Minister Nasser Bourita, following the inauguration Thursday in Dakhla of a consulate general of the Organization of Eastern Caribbean States (OECS).

“This very significant and promising diplomatic presence will certainly represent a great opportunity to further boost bilateral exchanges between Morocco and the six member countries of the OECS,” said Roosevelt Skerrit.

The Prime Minister of the Commonwealth of Dominica also reaffirmed his country’s recognition of Morocco’s sovereignty over all its territory, including the Moroccan Sahara, and full support for the Moroccan autonomy initiative as the only basis for a consensual political resolution of this regional dispute.

Skerrit noted that this is “a position of principle” adopted by his country, because “the sovereignty and territorial integrity of each country must be respected by everyone”.

On the other hand, the Prime Minister hailed “the pioneering role” of King Mohammed VI in favor of South-South cooperation and the Sovereign’s leadership in the face of many global challenges.

“The Kingdom has led the fight on issues of climate change, migration, access to education and economic prosperity,” he explained, while welcoming Morocco’s support to his country, especially during natural disasters.

Bourita on his part said “the advantage of this consulate is that it represents not only one country, but six member states of the OECS. […] This confirms the growing support for the Moroccan Sahara and the consolidation of Morocco’s sovereignty over its southern provinces.”

Bourita highlighted the depth of relations between Morocco and the Commonwealth of Dominica and the strong partnership that unites them.

He also noted the special nature of PM Skerrit’s visit in the city of Dakhla, in particular, and in the Moroccan Sahara, in general; a visit with particular symbolism marked by the opening of a consulate for OECS member countries.

The minister stressed that this trip is also of great importance because it was marked by the signing of a roadmap of cooperation for the coming three years (2022-2024).  He also praised the personal support of the Prime Minister of the Commonwealth of Dominica, which has been “decisive” in strengthening the presence of Morocco in the Caribbean.

Skerrit’s personal and consistent positions in favor of Morocco’s territorial integrity and sovereignty over its Sahara “have been clear from day one” and have been expressed in all regional organizations and at the level of the United Nations, said Bourita.

He underlined, in this regard, that the inhabitants of the region testify to this position of solidarity and clarity, as they have participated more than once in the 24 workshops organized by the United Nations in the Caribbean region, highlighting Skerrit’s clear support to the participation of representatives of the southern provinces in these meetings as well as his refusal to all allegations relating to the representativeness of the inhabitants of these regions.